In essence, PDFControls.NET provides a number of WinForms Viewer Controls that allow one to View PDF documents. The professional edition adds the ability to manipulate and save PDF documents. The class hierarchy for the viewer controls is as follows: 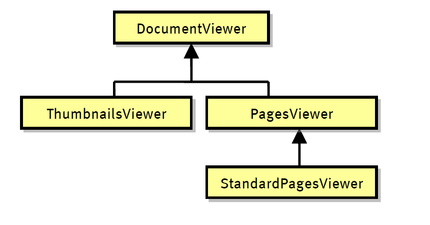 These classes provide the following functionality:

Next to these classes there is also a BookMarksViewer class. This control does not show pages, but it shows the bookmarks that are defined in a PDF document.

A simple PDF document viewer can be built by including a PagesViewer control in your GUI application, connecting its Document property to a Document instance, and writing a few lines of code to open PDF files. See the SimpleViewer sample:

The code above is all that is needed to obtain a viewer that: 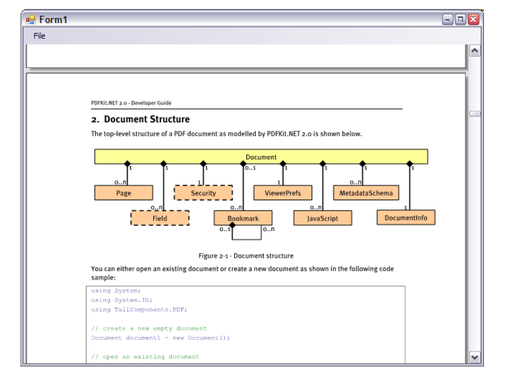 The standard edition does not allow changing or saving of PDF documents. In order to allow the professional version to save documents (including completed forms) one may add the following code. Also see the SimpleViewer sample of the professional edition.

Compile and run the ThumbnailsViewer sample to see this in action. 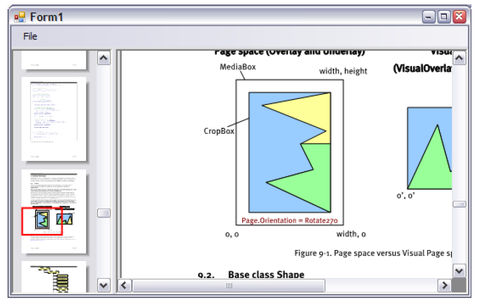 The DocumentsViewer is the base class of both the Thumbnails Viewer and the PagesViewer. It can be used as a rudimentary viewer of its own, although it lacks the notion of a “current page”, and thus it does not provide navigation to particular pages.

The BookmarksViewer does not show PDF pages, but it shows the bookmark tree that is defined in the document (if any). Its use is completely analogous to that of the ThumbnailsViewer. 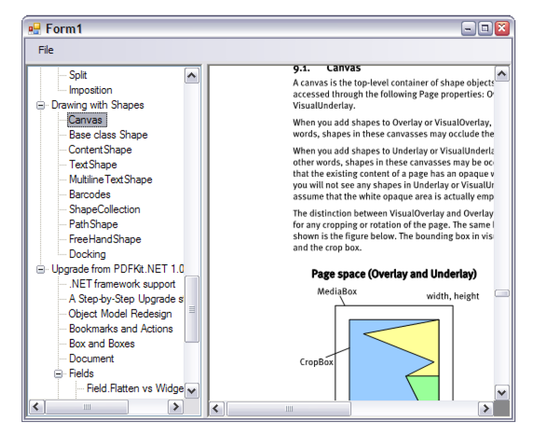 Download PDFControls.NET 2.0
We will send you a download link
Why do we ask your email address?
We send tips that speed up your evaluation
We let you know about bug fixes
You can always unsubscribe with one click
We never share your address with a 3rd party
Thank you for your download

We have sent an email with a download link.